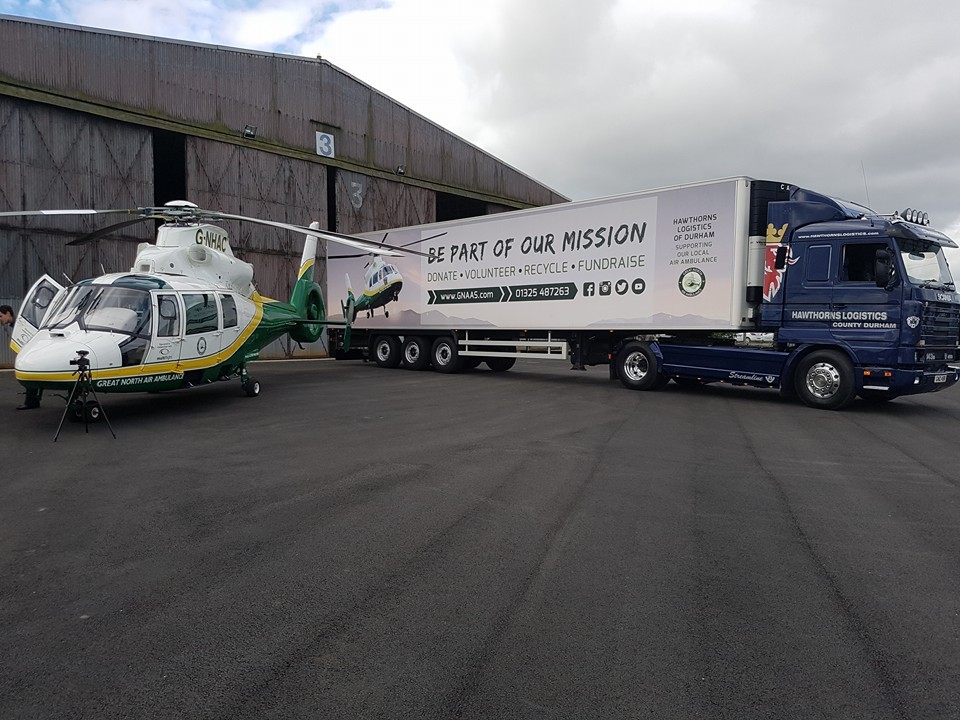 The helicopters of the Great North Air Ambulance Service (GNAAS) rarely leave the region but will nevertheless become a common sight throughout the UK after a haulier decorated trailers in support of the charity.

Chris Kilsby of Hawthorns Logistics approached the Darlington-based charity about using his long-distance vehicles to promote its life-saving work.

Mr Kilsby said one of his drivers had a close encounter with GNAAS in 2013 which left its mark on everyone at the Castleside firm.

“One of our lads was on the A1 near Belmont when a motorist lost control of his car and crashed into him”, he said.

“Being on the roads a lot, we are obviously aware of the work of the air ambulance, but when you see it up close you realise just what an important job it does”.

Hawthorns Logistics will support GNAAS by decorating three of its trailers with the message, “Be part of our mission”.

The trailers will be used to transport goods around the UK and Grahame Pickering MBE, chief executive of GNAAS, said he hoped it would help raise the profile of the charity.

“It’s a tremendous gesture by Chris and the team at Hawthorns Logistics for thinking of us and for arranging for this to be done, at no little expense”.

“As a charity, we are reliant on the support of the public to continue to exist, so promotion like this is incredibly valuable to us. We hope people will see the trailers and consider supporting us in some way, perhaps by donating, maybe by volunteering”.

Mr Kilsby prepared the trailers in time for National Air Ambulance Week, which runs from 19th to 25th September.

The annual event aims to increase awareness and support of UK air ambulances.

Be Part Of Our Mission