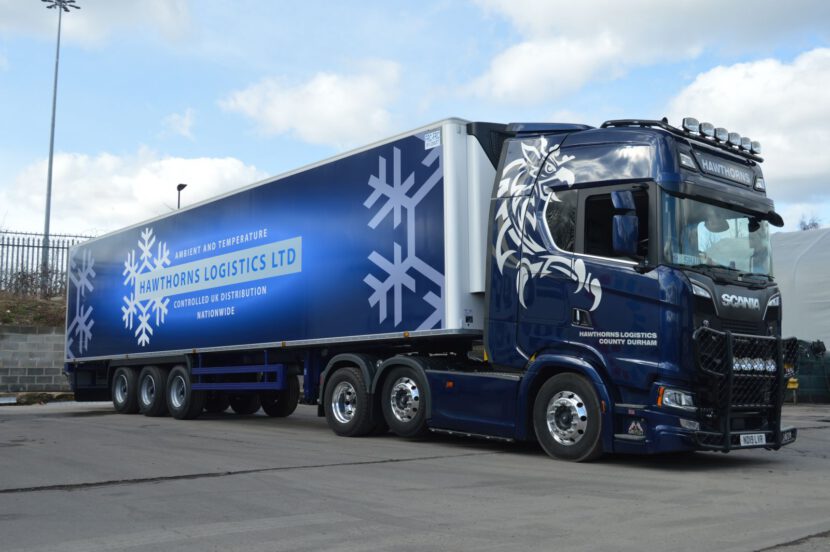 All are fitted with Carrier Eco HE engines, which is much cleaner for the environment.  They are also fitted with lift axles to save on front axle tyre wear.  A full R&M contract is in place with Volvo Truck and Bus Washington. 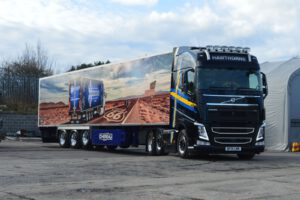 Most of the trailers will be finished in our company livery, though some will feature two of the charities we are very proud to support – the Great North Air Ambulance and Dragonfly Cancer Trust.  One trailer even features a limited edition “Route 66” design, celebrating Chereau’s 66th anniversary.

Keep your eyes peeled for our new trailers.  You’ll find them running up and down the East Coast of the UK every day, as far as Edinburgh and London. 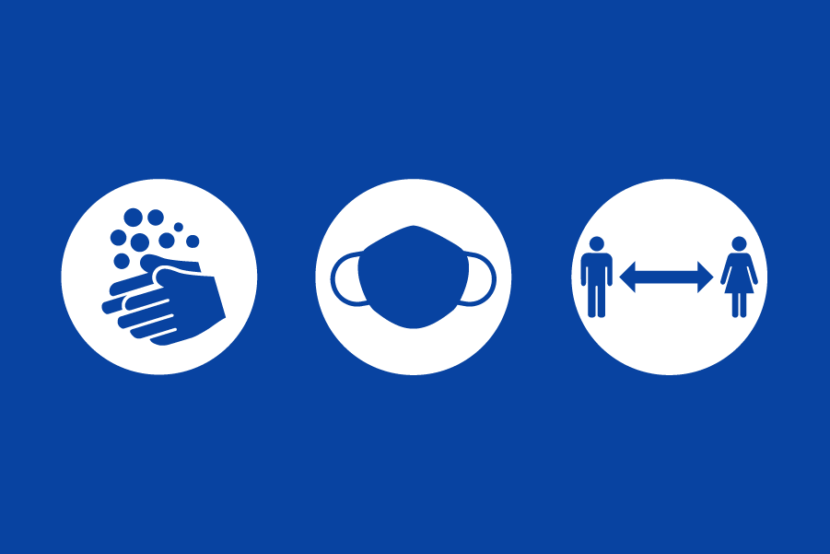 As we continue to watch in almost disbelief at the severity and impact of the coronavirus (COVID-19), it is at times like this you need assurance that Hawthorns Logistics are doing our best to remain compliant with the ever changing rules.

Hawthorns Logistics Ltd fully intend to remain open for business to support our customers and play our part in keeping the UK running.

We must also keep our staff, visitors, and contractors as safe as possible. These are unprecedented times, as we are unsure what will happen but rest assured, we will face these challenges and continue to focus on personal wellbeing and do everything we can to maintain a safe working environment.

We have already taken numerous steps to limit the spread of the virus within our organisation. We have adopted cleansing and hygiene procedures within our Vehicles and offices since the beginning of the virus outbreak. We have implemented homeworking when necessary and advised social distancing as we continue to adapt and improve procedures every day as we learn new updates from the government.

As the pandemic situation continues to dramatically change every day, the speed of change in information is clearly extraordinary. It is impossible for us to guarantee that we won’t be affected by the changes but we review the latest advice from Government, World Health Organisation and Public Health England on a daily basis to enable decisions to be made immediately as required.

We can guarantee, that our aim is to be here for you, open for business as safe as possible for as long as legislation allows.

I would like to thank you for your continued loyalty and would urge you to take all possible measures to help preserve the wellbeing of you, your colleagues, and your families. 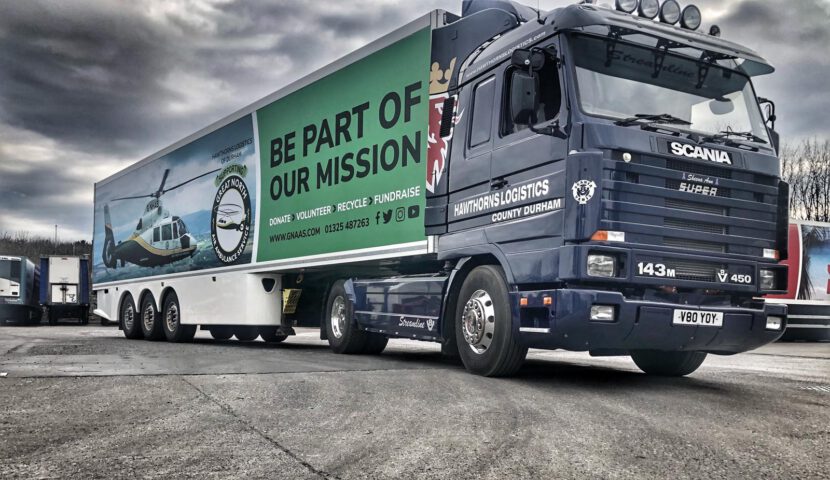 We are proud to announce we have two more trailers in the livery of the Great North Air Ambulance. Hawthorns Logistics now has a total of seven trailers supporting the charity.

They send us the artwork and we use Ace Graphics to print and fit them. 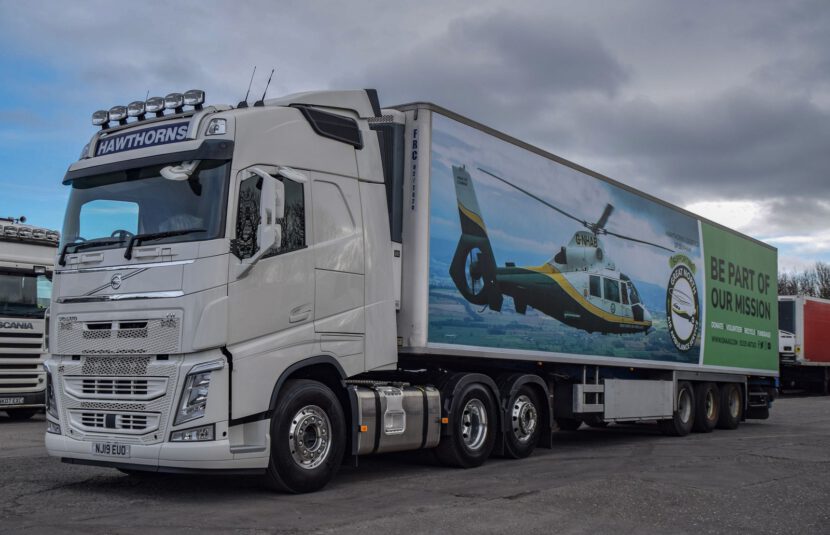 We took delivery of our first ever Volvo this month. It’s a Volvo FH4 540.

We have decided to compare the Volvo against the fleet of Scanias that we operate. 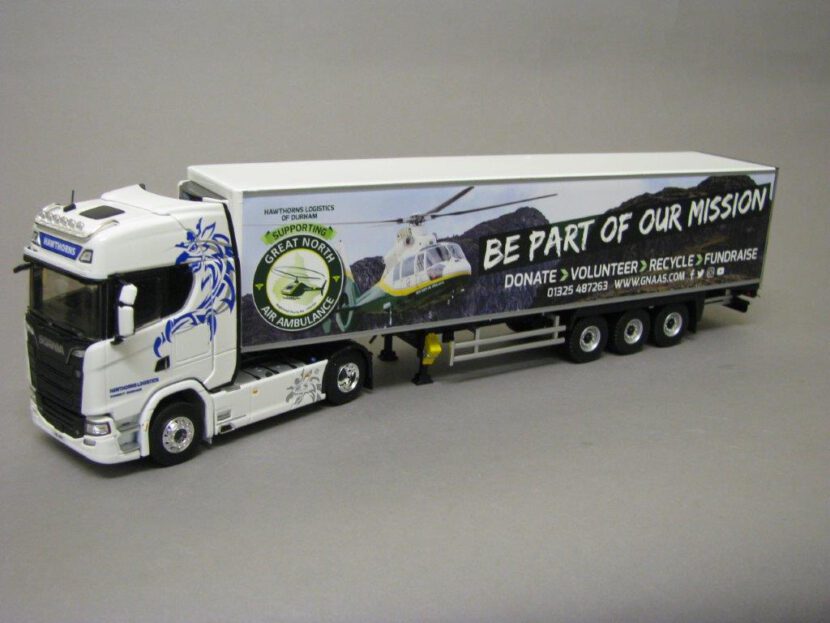 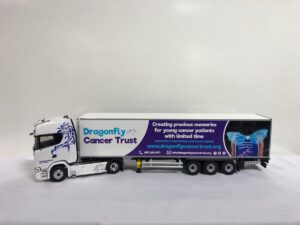 We have released some limited edition model trucks to raise some money for two extraordinary charities, the Great North Air Ambulance and the Dragonfly Cancer Trust.

The Great North Air Ambulance runs three air ambulances depending solely on the support of the public. Without the public’s help, they would never be able to offer the life changing saving support of getting people who have sustained life threatening injuries to hospital for treatment quicker than you would ever be able to get them there by road. The money raised by the sale of the model trucks goes fully to the Great North Air Ambulance to help them continue to offer the support they do.

The Dragonfly Cancer Trust supports young cancer patients with very limited time helping families and young couples create precious and lasting memories together. The charity provides Cash Gifts and organises Dragonfly Dreams for children and young people up to the age of 24 years old throughout the UK. This allows families to use what little time they have left together to make lasting memories that they can forever hold dear to them. Alike the Air Ambulance models, all the money raised by the sales of the models will go fully to the Dragonfly Cancer Trust to help them offer this life changing experience. 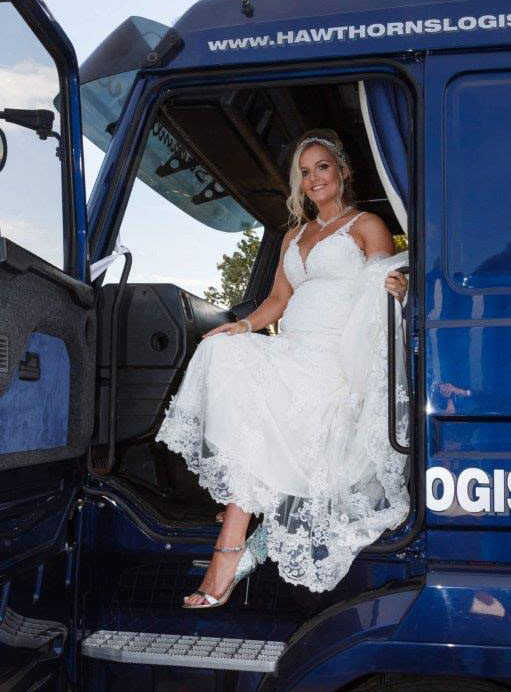 Heather, our daughter, was married in June and turned up to the reception in our 24 year old restored Scania 143! 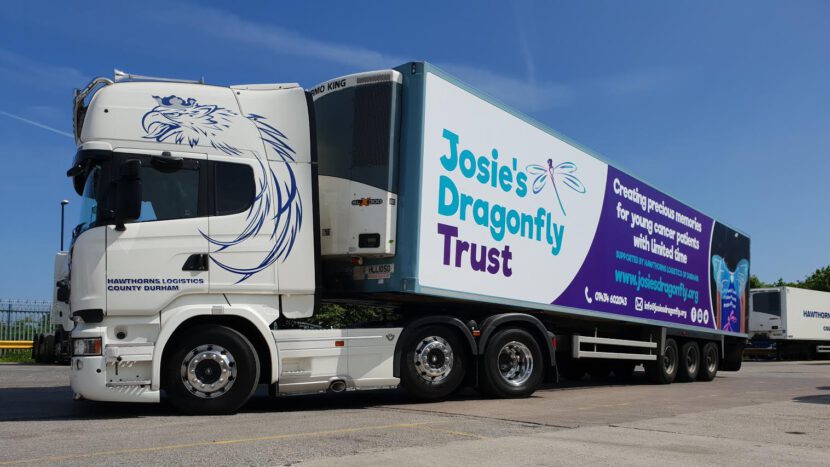 Josie’s Dragonfly Trust makes a very real and positive difference to the lives of young cancer patients with limited time.

They passionately believe in the importance of happy memories and work tirelessly to make them happen for young people and their families.

Hawthorns Logistics are proud to support such a fantastic cause by supplying two trailers in full livery.  Keep your eye out for this latest addition to our fleet! 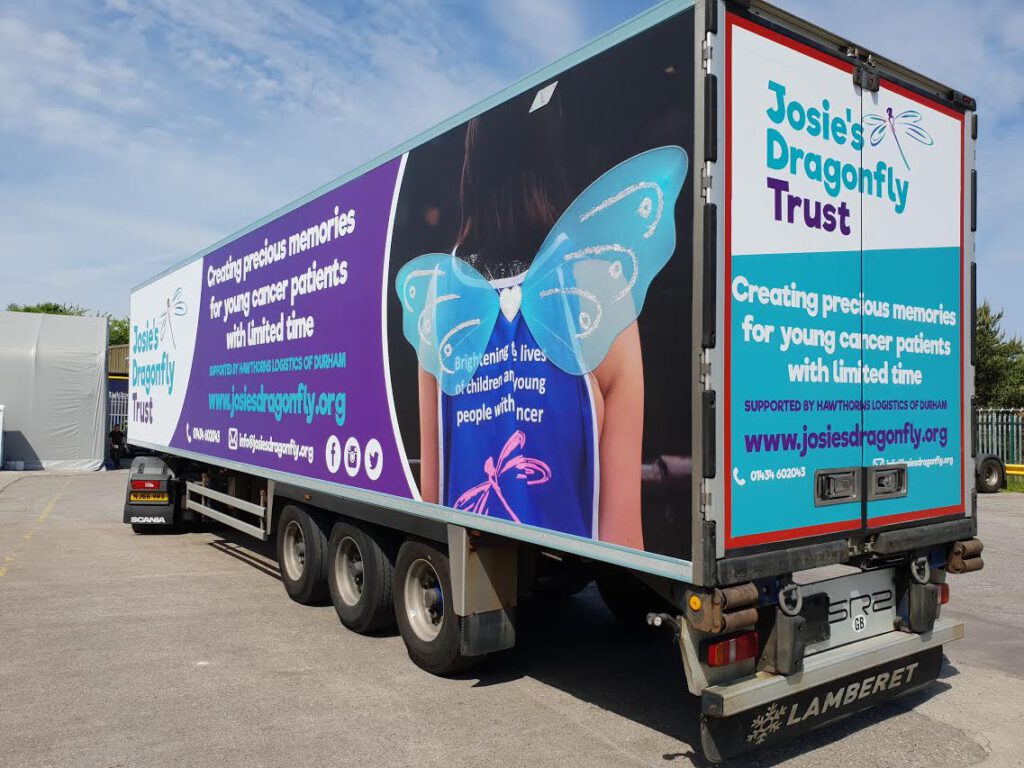 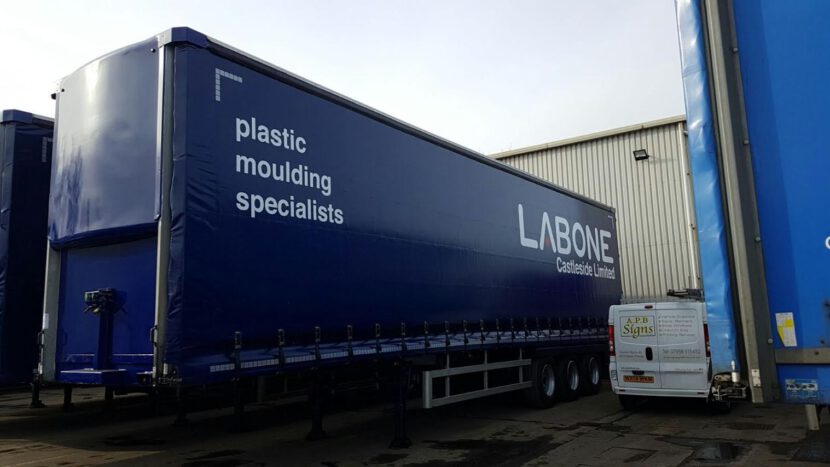 We have purchased five Laurence David 4.7 metre trailers that have gone straight into work liveried up in Labone Castlesie’s logos. 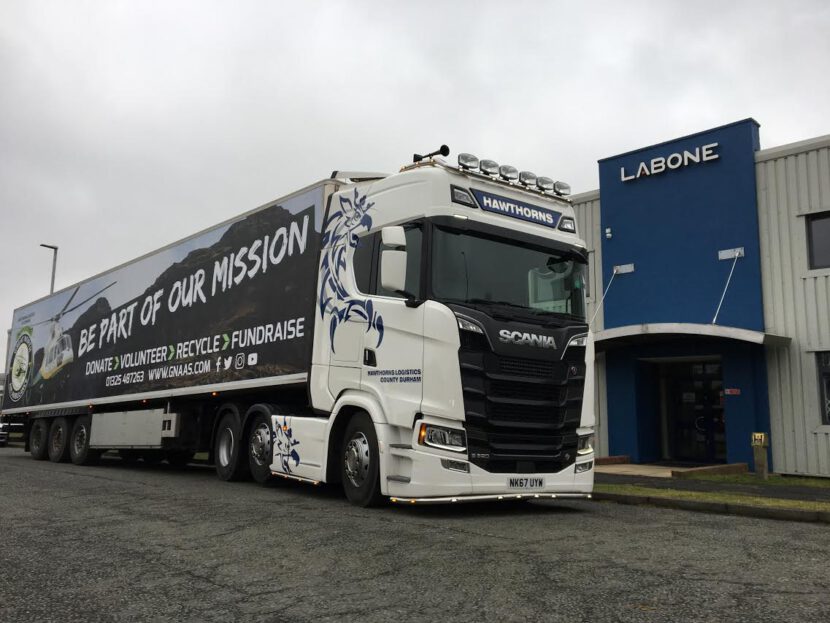 We are very proud to announce that we have won a tender to supply logistics for Labone Castleside Ltd, a plastic moulding specialist.

We were chosen to be their partner and supply 5 trailers delivering to major car manufacturers with just in time deliveries. Labone Castleside will celebrate their 50th anniversary this year. 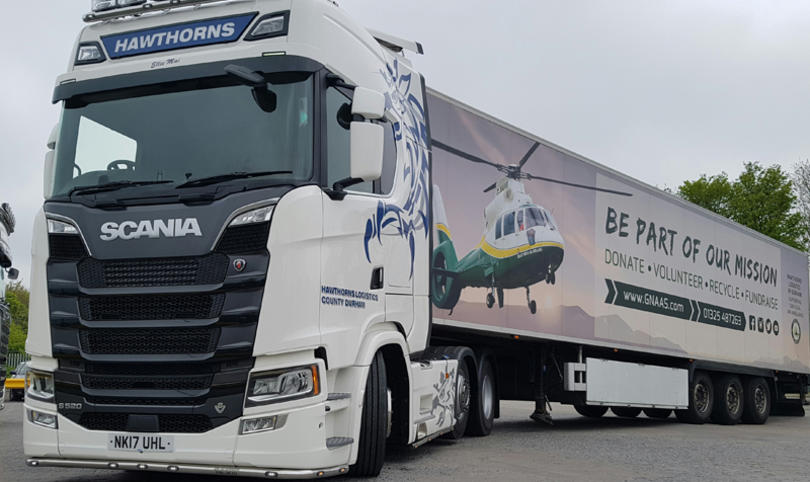 A Washington-based haulier is “over the moon” with the first two of six new Next Generation Scania tractor units.

“They’re considerably more expensive, but we’ve gone down the route with the V8 models because of residual value,” he told CommercialMotor.com.

He added that the company had switched to running Scania from another manufacturer, because the Swedish manufacturer offered more reliable support services and has a dealership a mile down the road from its site.

Feedback on the two Scanias, which are already out on the road, has been strong so far.

“They’ve been completely revamped. The interior is completely different to the old R-series, and more streamlined. We’re over the moon with them. Time will tell on the residual values, but we’re hopeful.”

The remaining four vehicles will be delivered between September and November, and the additions will be used in either a one-truck-one-driver operation or 24-hour trunking.

Kilsby said Hawthorns intends to use trucks on the former for five years, and the vehicles working around the clock for around three.

The new tractor units are pictured here with specially designed trailers in Great North Air Ambulance liveries, which the operator has supported for 12 months.

“Around three years ago one of our vehicles was involved in a road traffic incident when a car driver took a funny turn and collided with one of our trucks. We believe the air ambulance that attended the scene saved that man’s life,” Kilsby told CM.

The livery is available to buy on a model of one of Hawthorn’s previous Scania trucks, with all proceeds going to the Great North Air Ambulance.